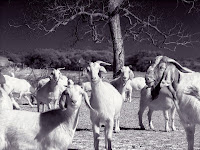 Last night I watched (or fell asleep to) a rather disappointing retelling of Betty Paige's life. yuck - it was terrible. But, in falling asleep before 9 30 I was able to wake up early enough to put in 3.5 hours at the gym this morning! I had a great cycle fit class....all of this exercise led up to a fantastic cook-off tonight that consisted of a killer refried beans recipe and some excellent guacamole.

But!
Before I get to my dinner I have to share my beauty treasure for the day: SunCoat Nailpolish, number 24. The colour is a tad more 'goldish' in hue than I was hoping for, but I can live with it. I found this little treasure at Noah's on Bloor at Spadina, and although it was more pricey than your average nail polish, it is 70% natural product and it isn't tested on animals.

Okay, so the beans.

I started with some Canola in my large wok, and added some organic tofu (1/2 a package that I pressed and than diced into small cubes). To the tofu I added some pepper and oregano. I let this satay for a wee bit and than added the diced red pepper, green pepper and a hot house tomato. While this little mixture warmed up a la medium to high heat (the tomatoes were great for adding liquid and preventing any sticking), I got to work on my guacamole only to find that I had left myself with only 1/2 an avocado (thanks to my chocolate pie adventure of last weekend), but I made do by adding 1/2 a tomato, the juice of 1 lemon and 3 cloves of garlic. I contemplated adding some silken tofu, but decided against it.
Back to the beans. I decided to go grad-school-stanely-ave styles and rather than using black beans I used some PC refried beans...they are nicely spiced....and voila, a little salsa, a little love and a whole lot of yummy.
I warmed up some pita in the oven and enjoyed a little bit of wendy mesley's Market Place (watch out of insurance deals when buying a car!) while eating my bucket full of beans.

I have no idea what those silly goats are doing. But, they have horns so I am not going to mess with them.
Posted by VeganCowGirl at 2:14 a.m. No comments:

I had a wonderful trip through Dufferin Grove Park tonight. All the 'bring your own bag' folks were milling about the growing-by-the-week number of vendors that were offering everything from organic herbs and horizontally traded chocolate to soy based treats and raw granola. I was glad to have only 2.50 on me or I think I might have opted for more than the vanilla-coconut square that I ruined my dinner with.

I am off to Vancouver next weekend. I am really looking forward to seeing Angelique and the littles. She has the best troop of littles and she really is an amazing mom. I will have to take a bunch of vegannie goodness with me, I am not sure how many options I will have in Campbell River and especially in Zeballos or Tassis. I am hoping to see the SuperPod.
Posted by VeganCowGirl at 1:40 a.m. No comments:

Nursing a supposed pulmonary embalism (never will I go to a walk in clinic again), I settled into my long weekend with a couple of movies. The most startling and well done was by the director of Hoop Dreams - Steve James. Check out Stevie if you are in for an evening of depressing and frightening nature of the human condition. Oh, and keep your eye on the puppy at the beginning of the film - he is the most light hearted aspect of the doc.

Anyhow, the other pick was Go Further, a documentary that followed the west coast (really bad) speaking 'mission' taken-on, and completed, by Woody Harrelson. The film wasn't that fantastic, a little self-congratulatory, though I was impressed with how little WH was actually in the movie - and he is one of the only guys to ever pull off hemp pants. Anyhow, one of the entourage that was traveling with Woody and his gang of do-gooders was a raw food chef. And low and behold she blew my mind by making (ahhh...NOT baking) an avocado-chocolate pie.

Although the credits didn't include the recipe, I was on a mission. I used a compilation from a couple of recipes that I found on vegweb.com, and before meeting Miss. Rankin for a nice little Monday afternoon tea (not green) I shopped myself silly in Kensington (you would be surprised how few shops were open on the holiday).....and I turned out a pretty amazing pie (Okay - I ate so much last night while watching The Name of the Rose that I was sick all day today).
Here is my recipe - give it a try and let me know. I still have half a pie left in the freezer, so be sure to stop by the Gladstone pad for taste testing.

Set aside the 1 cup of soaking walnut crumbles - let them be for about 1/2 hour. It makes them nice and sticky.
Add in your food processor your cashews and other cup of walnuts, whir the heck out of these until you are left with a mealie mush. Add to the mush your dates and raisins and whir her up. Add the cocoa, and remaining nuts and...whir. You should end up with a 'crust' that will lay nice and flat in your pie dish. Press the dough down firmly, and throw it in the freezer while you are getting the filling ready.
This is the easy part - throw EVERYTHING, except the dates, into the food processor and whip it up. I left mine while I was doing the dishes - The last thing I wanted was any avocado lumpies in the pie. While doing the dishes let the dates and about 1/2 a cup of water come to boil (see....mine isn't totally raw)...and let the dates boil down into an almost chutney consistency. Add this into your filling and whir again. If you feel the need to add some more sweetness you can add some chocolate via more cocoa or melt down some vegan chocolate chips.
All you have to do is add the filling to the crust and throw it back in the freezer.
I recommend leaving it for about 2 hours and then enjoying!!!

Ohhh...and last night I added some Quinoa to a whack of left over chickpea curry and I managed to impress a certain boy......
Posted by VeganCowGirl at 12:26 a.m. 2 comments: