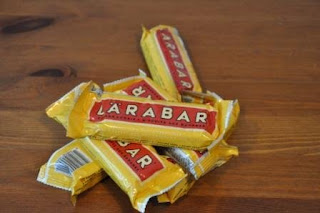 In addition to the great meals being cooked by Kevin, like last night's seitan-stuffed zucchini with fava beans, and my slap-dash rice dishes, I have also been indulging in a food that has new meaning for me.

Larabars were my best friend when I was burning up the treadmills. They were the perfect post-workout snack for me, and I loved their rawness and their easy transport. I was super sad when I moved to Belgium and realized that although many health shops sold another bar I occassionaly ate (osaki), no one seemed to carry Larabars. I was elated during a trip to my in-laws local Sainsbury's in England, when I spied a good stock of Larabars....so I have to cross the Channel to get them, but, hey! they are worth it.

I had asked my mom to bring me a couple of bars a few weeks ago when they made their transatlantic trip to visit Aodhan, but I wasn't expecting a WHOLE BOX! That's right! My mom and dad pulled 20 or so Larabars out of their suitcase - I couldn't have been more thankful. They were the perfect food for a new veganmama, who need both the energy and the easy eating styles of all Larabars. I had actually never had this flavour before: BananaBread. Oh! They are just so good and they really do taste exactly like my mom's banana bread. Num Num!

I am nearing the end of the stock and already feel myself getting a little weepy over the idea that I will have to wait another while before I can get my personal Larabar stock over here in Larabar free Brussels.....

If you have some time on your hands write Lara a little email and tell her she needs to get some more stockists over here in Europe....even if only for the expat crowd.....
Posted by VeganCowGirl at 12:07 p.m. 11 comments: 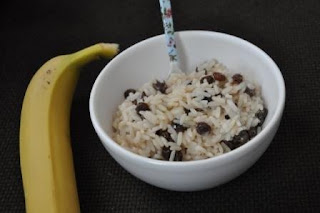 I have a few precious seconds. These seconds are usually stored up and used for bathroom breaks or, on a really good day, to take a shower. But, today, I decided to skip the shower and give a super quick update:

I have made ONE meal in the last 19 days...one meal. This is what comes from Attachment Parenting and on-demand breastfeeding, in other words - I live on the sofa with a little vegan baby in my arms. Kevin is great and has been a cookery whiz. No starving going on here.

What was my one meal you ask? I managed, through the ingenuity of 'rice in a bag' (Never would I have considered such a thing) I made myself some Rice Pudding. It was super nummy, but since I used long grain rice, which doesn't produce that nice gummy and goopy consistency of short grain, it was more like Rice-Non-Pudding or Breakfast Rice as I renamed it later in the day (after also having it as Lunch Rice and After-Dinner-Snack-Rice).

3 cups of rice: cooked
2 cups of almond milk - more if you are going for the pudding
2 tsp of cinnamon
1 cup of raisins

warm through and enjoy! I had mine with a banana....the first time that is. :)

Hope everyone is well and enjoying their summer?

and, of course, a gratuitous picture of the cutest vegan in the world! 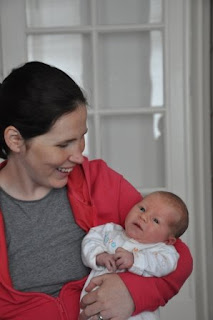