I was starving at the end of my day and had intentions of making some of the much blogged about carrot cake cup cakes, but I needed a little something else to go with them. I left work feeling pretty cranky - late night listening to the poorly engineered Tegan and Sarah, and then making the silly decision to run to work - cranky to say the least. But, once I started crafting a dinner plan in my head I felt bright and shiny. R 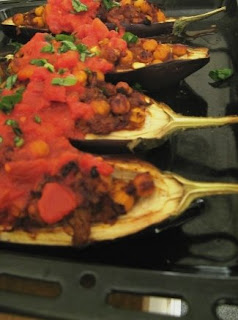 eady for the most missing of essential ingredients or the most over-stuffed muffin trays. Bring It!!!

In the pursuit of slowly cleaning out the fridge in preparation for our Sunday departure for Slovenia, I decided to work on the premise of using the two eggplants I bought on Sunday. I didn't want curry, I didn't want fried (please remember the re-kindled love between me and my oven), so I opted for throwing together a new recipe that I am christening my Eggplant Pockets.

Ingredients:
-2 eggplants
-1 onion
-1 can of chickpeas
-cumin, coriander
-1 can of tomatoes
-a tiny bit of olive oil

How To:
I cut the eggplants in half (along the horizontal) and hollowed them out. I added oil to a pan (yes, I did have to use the stove top) and chucked in the onions, followed by the spices. I let this cook down for a while before adding the eggplant-innards, which I diced up. I added half the can of tomatoes (reserving the other half for later), and chickpeas and let it cook for about 15 minutes. Stuffing the eggplant shells was quite easy because they were still raw and firm. I cooked the four 'pockets' for 45 minutes - adding the remaining tomatoes across the top for the final 5 minutes.

My baking tonight was inspired by the various scrumptious looking photos posted by Happy Herbivore, Dr. Stonielove, and Pleasantly Plump Vegan. However much I wanted to taste the flavours being raved about on these blogs the dream of recreating a recipe was not to be had. Tweaking was necessary, when, after picking up what I thought were all the essentials, I realized that I was fresh out of apple sauce, or rather, I was fresh out of fresh applesauc 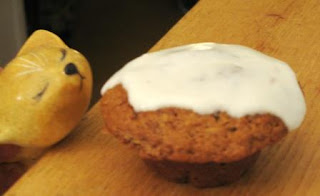 e. For, I had mowed down on all the organic sugar-free for breakie and had only a skanky, moldy bottle of apple sauce hidden away back behind some atomic mustard we bought on our trip to Ghent.

Hmmm...what to add. In the end, inspired by the title of P.P.V's recipe, I decided to add Coconut Milk to make up for the lack of apple sauce. I admit, my goodies aren't fat free - ahh well. The other little twiddle that I did to the recipe was...I didn't end up making cup cakes, so much as I made Muffin-Cakes. I guess I was a little too indulgent with my spatula and ended up adding a wee bit too much to each little cavity in the tray...and well, hey...they came out looking like muffins - but! the more yummy nummy good stuff to add my yogurt, coconut milk (why stop?) and maple syrup 'icing' to? My friend/colleague Britt is receiving a special Muffin-Cake treat tomorrow - she has had a hard week and needs a little vegan baking love.

I added all the dry ingredients, mixed them up and then added them to the wet. I added the coconut milk until I had the consistency that I was looking for. I popped them into the oven at 350 for about 20 minutes.

Alright, two days of work await me before my holiday. Can't wait.
Posted by VeganCowGirl at 8:23 p.m.

Mmmm, I love coconut milk in baked goods. It makes everything so moist and delicious!

Those muffins! I'm going to have to put my mark on them as well. I have seen them on all the blogs you mentioned and now YOURS TOO!

Don't feel bad about not making fat free treats, cupcakes aren't supposed to be healthy! That's why they are dessert! Indulge yourself from time to time! I would happily indulge on one of these bad boys, I think the addition of the coconut milk sounds fantastic.

(Oh, I forgot about your fat intolerance, I hope they didn't make your tummy hurt.)

Those eggplant pockets amaze me. They sound incredible and they look so professional and amazing! everyone takes good food photos BUT me :(

on another note, I'm glad I'm not the only one who gave into carrot cake temptation!

Hey Jennifer,
Thanks so much for your comments. I agree that cupcakes (and other goodies) don't need to be fat free - and for me, personally, it really depends on the amount of fat and what food I am eating. P.B - maybe a quarter of a spoon and I have a sore tummy, anything more than a chunk of avocado and I feel funny....but Olive oil in baking/cooking is fine and I can eat coconut milk in curries with ease. The doctors found my whole tummy issue a really curious thing when it started happening - and...the verdict is still out on a certain diagnosis. Oh well...like with cooking and baking I keep experimenting. But thanks for being so thoughtful.

Your eggplant pockets are quite impressive, I bet they were delicious!

Hey Rural Vegan -
They really were...I wolfed mine down. I plan on making them again - for sure!

The Eggplant Pockets of yours look so yummy!

I still have to try those carrot muffins everyone has been blogging about.